The Only Thing You Have To Lose Is Your Psoriasis 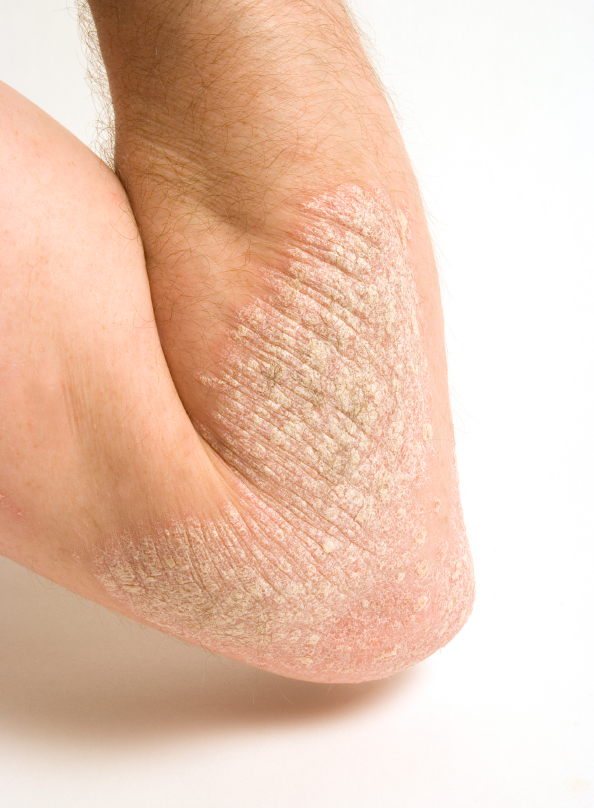 Chronic (or common) plaque psoriasis affects over 90% of sufferers. It usually appears on the elbows, lower back, scalp, arms, shoulders, knees and legs. The chronic plaque-type is hardly seen in affecting children, but rather seems to be an adult condition. Chronic plaque psoriasis rashes may not be itchy, or be an uncomfortable. It is usually the appearance of this condition that bothers the patient. 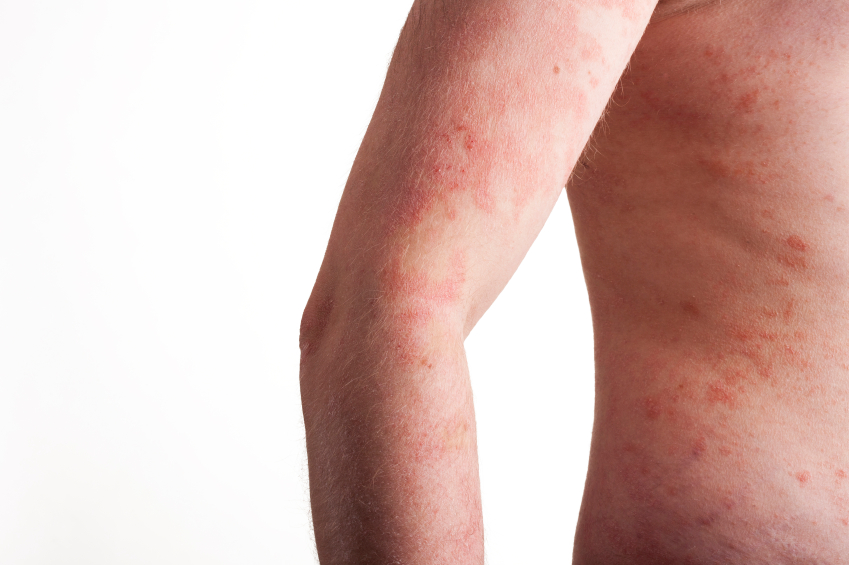 Guttate psoriasis (pictured to the right) is characterized by small red dot-like lesions. The word guttate is derived from the Latin word gutta meaning "drop." It may be described as looking like a drop of psoriasis. Guttate is the most common type of psoriasis occurring in children and young adults who have a prior history of upper respiratory infection, pharyngitis, or tonsillitis. The lesions are not as scaly as plaque-type psoriasis and are likely to be found on the trunk and involve the face. The facial lesions of a guttate psoriasis rash are sometimes confused with the papules of rosacea.

Guttate psoriasis is the least severe form of psoriasis. Another common name for this condition is Eruptive psoriasis.

Pustular psoriasis is characterized by pustules, which are blister-like lesions of non-infectious fluid, and cause intense scaling. This type of psoriasis rash usually appears as a large red area covered with yellow-green pustules.

Pustular psoriasis rashes can be classified depending on the severity of the symptoms:

1) Acute in which the symptoms appear suddenly and are severe in appearance.

2) Chronic, which are, classified as long-term episodes, which re-occur frequently.

3) Sub-acute which a classification in-between sudden and severe episodes and long-term re-occurring episodes.

Pustular psoriasis is further divided in subsets defining specific symptoms and conditions in which it occurs:

Erythrodermic psoriasis gets its name from the Greek wording as 'erythro' means red and 'dermic' means skin. So the meaning is simply 'red skin psoriasis' and is very seldom found in patients. And fortunately for the patient it rare, as very large areas of skin are affected with intense redness, swelling and later exfoliation of dead skin. Other symptoms of erythrodermic psoriasis include extreme itching and pain. Patients should always start with a dermatologist due to the large skin area, chills,and an increased body temperature. Usually erythrodermic psoriasis starts from plaque psoriasis or some other type of psoriasis that is out of control. The most creditable cause is that of 'metabolic acidosis' as the body is too acidic with the immune system breaking down which causes the chills and fever. A good place to start is to 'tune up' your body with 10 to 12 glasses of water for the average person and plenty of vegetables and fruits. Avoiding those foods that bacteria, virus and fungi thrive in such as carbohydrates, sugars and sweets and alcohol can help to create a more alkaline, less acidic balance in the body. 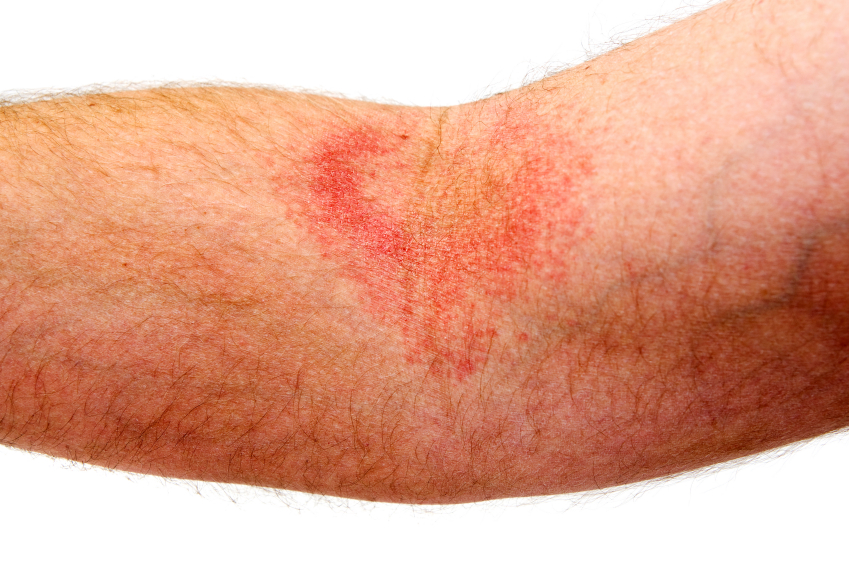 Inverse or Flexural psoriasis is characterized by smooth inflamed lesions in the body folds with the red rash appearing in private and most often unseen areas such under the breast and the groin areas, rectal crack area or behind crack, and armpits where the skin has friction or rubbing with sweat and moisture due to poor evaporation. Often plaque psoriasis appears nearby with red rash spots. Most often but not necessarily, the patient is middle aged and overweight which causes some of the skin rubbing or friction and the resulting red irritated area.

Koebner's Phenomenon psoriasis are psoriatic lesions which appear at the site of injury, infection or other skin psoriasis, or may be a new lesion in an existing rash. The cause of the Koebner's phenomenon is unknown, however, it is more prevalent in patients who develop psoriasis before age 15. Up to 50% of psoriasis patients will experience new lesions forming at the site of healing wounds. Approximately 10% of psoriasis sufferers experience the Koebner's Phenomenon with every skin injury or condition, and its chances of occurring increase when the psoriasis is in an active stage.

Psoriasis and arthritis can occur together. Approximately 10% of patients who have psoriasis also develop an associated inflammation of their joints. When this happens, it is known as psoriatic arthritis. Psoriatic arthritis usually occurs in the joints of the fingers and toes. Patients with psoriatic arthritis often report the occurrence of acne as well as changes in their nails.

Seborrheic scalp psoriasis may resemble severe dandruff. Patches of thick, flaky skin may extend to the forehead below the hairline. Scales may build up in the outer ear. The face itself is usually unaffected; this is an important feature in the diagnosis of scalp psoriasis due to the fact that with rosacea you can have episodes of seborrheic dermatitis.

Ear Psoriasis can appear as dry scales in the ear canal. Psoriasis in the ears can cause scale buildup that blocks the ear canal. This scaling, when combined with normal earwax, can sometimes produce the physical blockage of the external ear canal leading to a temporary decrease in hearing. Psoriasis of the ears occurs in approximately 18 percent of all patients at some time.

Nail Psoriasis can affect both the toenails and fingernails. Psoriatic changes in nails range from mild to severe, generally reflecting the extent of psoriatic involvement of the nail plate, nail matrix (tissue from which the nail grows), nail bed (tissue under the nail), and skin at the base of the nail.

Ocular psoriasis can cause inflammation of the eye, dryness and discomfort. When psoriasis affects the eyelids, scales may cover lashes. The edges of the eyelids may become red and crusty. If inflamed for long periods, the rims of the lids may turn up or down. If the rim turns down, lashes can rub against the eyeball and cause irritation.

The symptoms of a psoriasis rash can encompass different stages. Some people may experience limited psoriasis symptoms while others may experience more widespread symptoms of psoriasis. Psoriasis occurs when skin cells mature at an accelerated rate. On a normal basis, skin cells grow, mature, and shed about once a month. Skin cells of a person with psoriasis grow nearly seven times faster and build up at the skin's surface resulting in red, raised, scaly patches and lesions. Although some individuals complain of itching, it is not a very common complaint. Only 30% of people with psoriasis complain of itching. Individuals who scratch their psoriasis can cause cracking and bleeding, making the symptoms of their condition worse. Development of psoriasis is caused by genetic factors and approximately one-third of individuals with this condition can trace the cause to a positive family history. Without treatment, psoriasis is a potentially life-disruptive condition. Research has shown that many people seeking treatment have even missed work because of their condition.